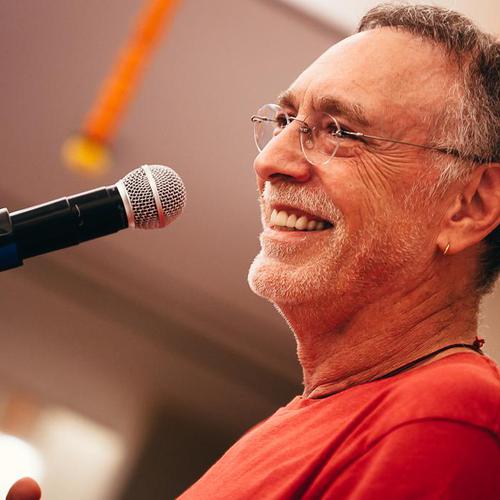 Sessions covered by this speaker

Have you purchased yours?

Layering traditional kirtan with instantly accessible melodies and modern instrumentation, Krishna Das has been called yoga’s “rock star.” With a remarkably soulful voice that touches the deepest chord in even the most casual listener, Krishna Das ” known to friends, family, and fans as simply KD ” has taken the call-and-response chanting out of yoga centers and into concert halls, becoming a worldwide icon and the best-selling western chant artist of all time.

KD spent the late ’60’s traveling across the country as a student of Ram Dass, and in August 1970, he finally made the journey to India, which led him to Ram Dass’ own beloved guru, Neem Karoli Baba, known to most as Maharaj-ji. Given the name Krishna Das, KD began to chant as part of following the path of Bhakti yoga, the yoga of devotion.

In 1994, KD started leading chant at Jivamukti Yoga Center, NYC, with an ever-growing audience of yoga students that has led him to chant with people all around the world. The award-winning film ‘One Track Heart: The Story of Krishna Das’ has been in over 100 US cities, over 10 countries worldwide and is available on DVD everywhere.

Visit our Sponsors to deepen your Conference experience! Each brings a wealth of wisdom and resources to support you on your journey. If you have any questions, please contact us.
We use cookies This website (and some of its third-party tools) use cookies. These are important as they allow us to deliver an exceptional experience whilst browsing the site.